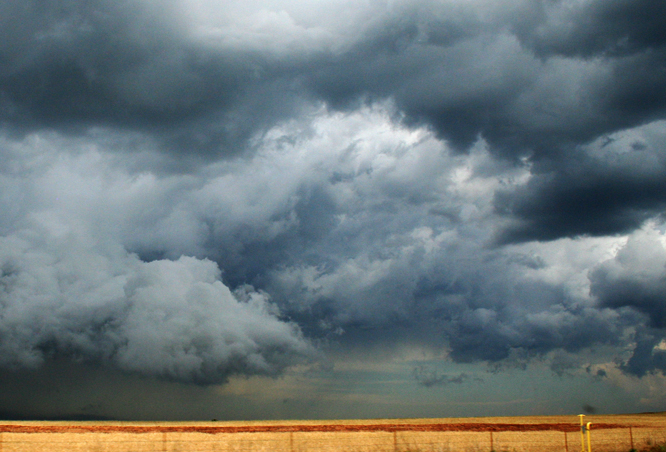 I love storms.  I love their power, their intensity, their beauty.  They are captivating to me.  Whenever a storm rolls through, I open the windows so that I can hear the thunder and smell the rain.  I’ll go outside so I can see the lightning.

I miss being in Texas, where you could see so far.  You could see storms that were miles and miles away.  At night, driving across the state on back highways, sometimes I would stop if I saw lightning in the distance.  You could see the lightning lighting up the storm clouds from the inside, providing the briefest glimpses into their beautiful structure available only to the intent and patient watcher.  During the day, you could watch sheets and walls of rain sweep across the landscape from a distance, sometimes passing you by, sometimes moving inexorably closer and closer until the rain hits you and blinds your vision of the storm.

Up here in Michigan, vision is limited by the trees.  The trees are so tall and so pervasive, that even in the most open areas around highways and fields, you can only see for five or ten miles at the most.  Up here, if a storm is rolling through and you haven’t been paying attention to the weather radar and forecasts, the storm can be upon you almost before you know it is coming.  Maybe you’ll get a few minutes to see the rolling clouds sweep in overhead.  If it’s a big storm front, you might see the outflow coming in up to an hour before the real storm, but that’s just a gray wall that obscures the structure of the storm.  Up here, storms usually come with fronts, a squall line, not so much the isolated storms that can pop up over the plains.

I’ve never seen a tornado.  I want to, someday.  That’s definitely on my bucket list.  I’ve been close, but I’ve never actually seen one.  Once, I know we were within a mile or two of one, but we were in the rain and couldn’t see anything.  I want to see one from a distance, a few miles, far enough to be relatively safe but close and clear enough to see the storm, see the churning clouds and the patterns of circulation.  I want to see a hurricane someday too, if I can find a nice, thick, concrete bunker with reinforced bulletproof windows to watch from (because I’m not actually stupid).

Every time there is a storm system rolling through whatever area I am in, I am glued to the radar, alternating with running outside to feel the storm if it is overhead.  I watch storms like some people watch football or racing, and I wait for that tornado warning the way those others wait for the pileup, knowing it is awesome and deadly at the same time.  During hurricane season, I subscribe to all the NWS updates, I follow all the charts, read the discussions of the forecasters (who can get pretty silly sometimes), and always stay glued to the radar.  The images are fascinating, captivating.  I can’t get enough of them.

I am a stormchaser.