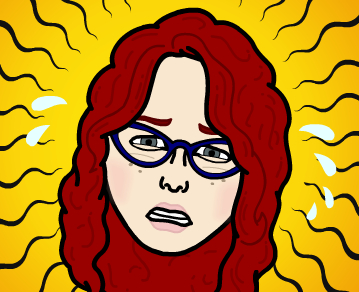 If a crisis happens to somebody else, I’m all in.  I want to help, my brain will shift into high gear and look for solutions, I’ll do my best to comfort and fix and help where I can.  But in a personal crisis, forget about it.

It’s a pattern, and I can’t deny it.  When faced with personal crisis, the first thing I do is lose it.  I fall apart.  I go into a cycle of negative feedback, where nothing is good, no idea offered by others can possibly work, and The World Is Going To End.

The most obvious example of this that comes to mind is car accidents.  I’ve done the same thing with every single one:  Cry, sit on the sidewalk and wait for somebody to fix it, yell and cuss at the other person if it was their fault.  (My brother has absolutely no idea how much self-restraint I mustered when he rear-ended me!)  Doesn’t matter if it’s a fender-bender or a car-smasher, my reaction is the same, acting as if somebody died even when nobody is hurt.

It happened when the triplets were born at 26 weeks, and half a dozen times while they were in the NICU.  Every time the doctors came up with a new problem, I’d lose it and have to leave the building for a while.

Vandalism in my yard. Finding out I really was a pariah in the co-op, it wasn’t my imagination.  Oddly enough, I’m finding it surprisingly hard to come up with many examples.  I don’t do it for slow crises, things that develop over time or that don’t have an immediate impact.  It’s for things that require immediate action that I freeze like a deer in the headlights.

Last Friday, I woke up to a flooded basement, apparently from a sewer drain backup.  Oh my gods, The World Was Going To End.  I spent half the day just crying, unable to lift a finger, unable to think clearly enough to make any plans.  By that evening, though, I was over it and helping, moving and sort things to clear out the flooded area, making plans to refurbish the floor and rearrange the furniture.  Now I’m fine, it’s just something that happened.  It forced us to hurry up and do some things that we needed or wanted to do anyway, just faster.  It’s not that big of a deal anymore.  But first, I had to break down.

I don’t know what that means if a bigger crisis were to strike.  Something like a zombie apocalypse might be slow enough not to trigger that breakdown, or it might not.  I guess that when I make disaster and contingency plans in the future, though, I need to count on a breakdown period before I will be able to do anything.  I may be able to follow simple, premade instructions during that period, but I won’t be able to think, and I may be weak and vulnerable.

This is an important thing to know and understand about myself.  Trying to deny it and pretend I’m always strong won’t change it, it will just make it harder to deal with when needed.  So I need to plan for it and expect it.