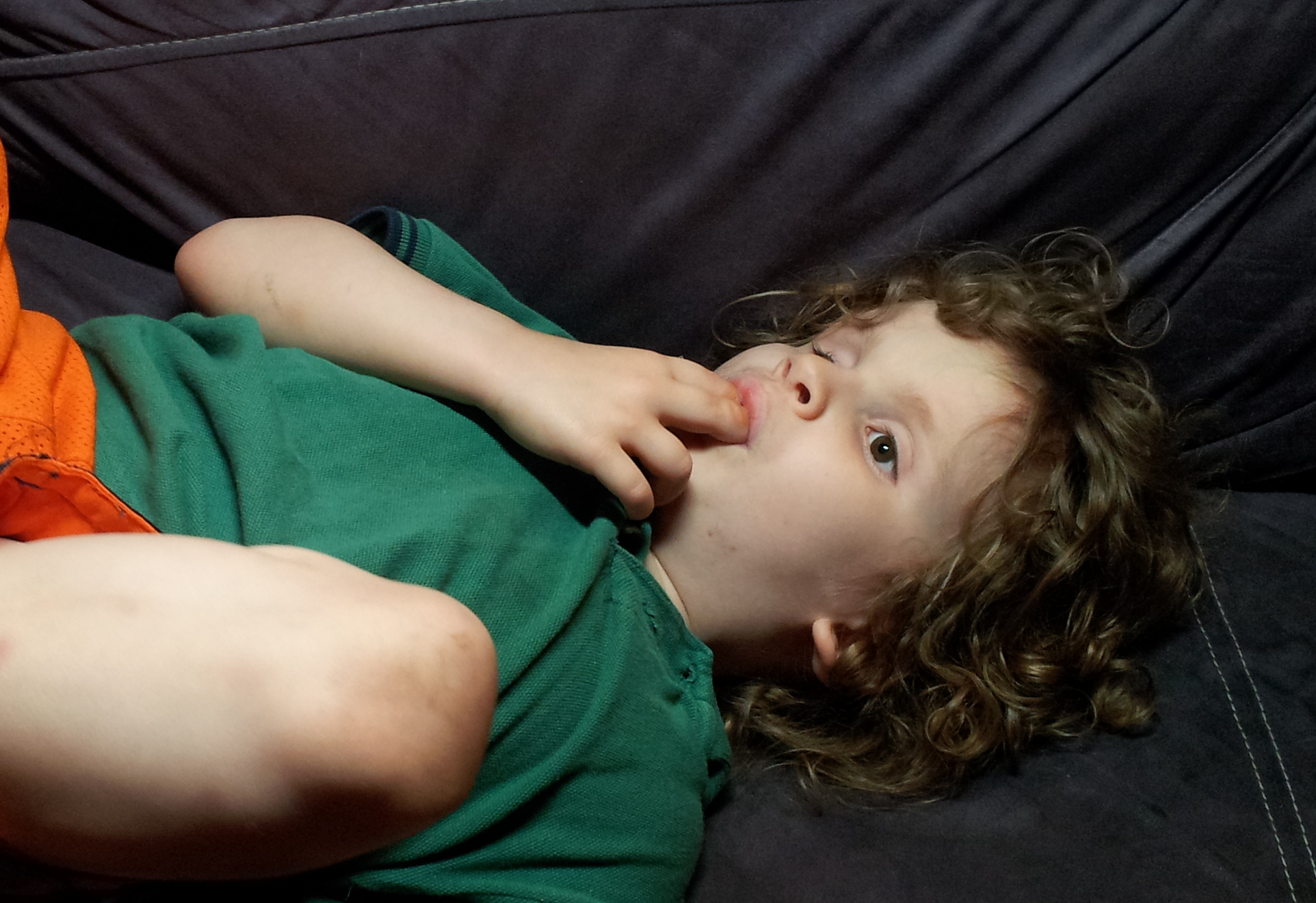 Sometimes I think I should cut those curls, get them out of his face and eliminate the chore of combing them out, but then I think he just wouldn’t look the same without them. I still want to wait until he asks for a haircut.

Kender has been very “stimmy” lately, as well as echo-y.  I think he’s getting ready for a developmental spurt.  He seems to be about 2 right now, developmentally.  Caitlin was 2 when she spent several months following Tamara around everywhere, copying every word and gesture.  After that, Caitlin seemed very neurotypical because she had all those social behaviors down.  Kender’s mimicry right now reminds me of that period with Caitlin.

We did a very brave thing this month.  We took Kender with us camping at a festival.  It was a small religious festival with lots of people that we personally know. In that group, even those we don’t know would still look out for us, and that made us more comfortable being there.  Also, my mother came along with her new trailer, promising to watch him, so that gave us an extra set of eyes and hands as well as a bit of a lockup.  The festival organizers were fantastic, letting all of the security personnel know about Kender and keeping an eye out for all the kids.  As it turned out, Kender was overwhelmed by being there, and just wanted to stay in the trailer all day.  Whenever we tried to take him out to join in, he started screaming.  Even in the trailer, he spent a large chunk of the day hooting and howling.

I’m looking forward to attending this festival again next year, with Kender’s service dog.  My hope is that the dog will help him feel comfortable enough to go out and mingle with everybody and participate more.  His being overwhelmed was something I didn’t even consider, as worried as I was about his potential for escape.  I forgot how often he shuts down in crowds, in noisy places, in unfamiliar places.

Kender has made quite a few leaps recently.  Last week, he finally learned how to use a straw, which is a huge development.  This month he also started interacting with games on our tablets, and I’ve even seen him paying attention to the television.  He got a new trike for an early birthday present from his grandma, and he’s pedaled it himself a few times.  He can get into a swing, albeit by a rather roundabout method.  He has started getting himself dressed in the morning and putting his pajamas on at night, when everybody else does, and he sometimes comes and tells us when he needs a diaper change. He tries to put his shoes on, although he can’t quite manage all the straps yet.  When we go to the park, he plays on the playground more instead of instantly taking off down the nearest sidewalk.

One new development needs some attention:  Kender likes things that go bang.  He has taken to knocking over our dining room chairs to hear the bang, and he did the same thing at church to the chairs there.  He’s already broken one of the dining chairs doing this.  He gets on the counter and throws my mixing bowl on the floor.  He knocked over his sisters’ jewelry armoire so many times the lock broke (although thankfully the mirror is still intact).  I would love to find a way to fulfill whatever need this is in a less damaging way, but I haven’t figured out how yet.