Yesterday evening my husband and I had a wedding to go to.  Or, rather, a wedding reception.  We were invited as acquaintances.  I have no real friendship or connection to either the bride or the groom.  In fact, the groom couldn’t even remember my name!  Which means I was sitting for about four hours in the middle of a celebration in which I had absolutely no emotional investment, with people I did not know and mostly would never see again.

I did get dressed up for it, because it’s not ofte 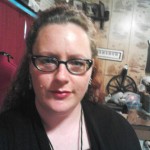 n that I get an excuse to get fancy.  The wedding and reception were listed as “semi-formal”, which is a bit nicer than anything I had ready to go (and actually able to squeeze into!).  I made a new tank top and bought some heels that gave me some optimistic thoughts.  Normally I would never wear heels, but I am still waiting for the replacements for my broken sandals.  I even put on makeup!

I think they were the flower girls or something. I’m not sure.  I do have wings, though. I wore them to my last wedding.  After this, I’ll be sure to bring them to any future weddings I attend.  Maybe a tiara, too, just because.

Strange DJ, strange music choices, but hey, it’s not my wedding.  But really? Who’s idea was it to take “Time After Time” and turn it into lounge music?  I’m not talking about comedy, either; this was a serious cover.

Usually an open bar someplace means you’re going to see some serious partying.  There were too many small children in attendance for anybody to let their hair down last night, though, and I swear I only had three glasses over the four hours or so that we were there.  Totally not drunk, just bored.

No, I have no right to be a fashion critic.

Not being able to pull off lipstick with what I consider sufficient grace is a large part of why I don’t wear makeup very often anymore.  I used to wear just eye makeup a lot, but then I discovered that many people don’t notice when it’s behind my glasses unless I have lipstick to go with it, so I stopped trying.  I got some suggestions from this post, and I may have to try them out soon.

She may not have actually been holding her chest up as she ran toward the buffet line, but it looked like it.

These very charming glasses partially filled with blue liquid and little tea lights were the centerpiece of the buffet table.  The way things were arranged made them look like something that should be taken.  I almost went up and brought one back to my table.

My husband got up to get seconds from the buffet.  The very instant he turned away from his chair, a waiter swooped in and grabbed everything from his place, including his silverware, leaving only a napkin.  Brian ended up having to grab more silverware from an adjacent table.  There was none on the buffet line.  He did attempt to prevent any further silverware thievery the next time he got up. 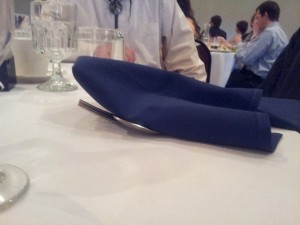 Remember my mention of the Bangles and Cyndi Lauper. Yeah….

As a cake maker myself, I hope they didn’t pay too much for this cake.  Flavorless white cake with whipped frosting.  Even the strawberry stuff in the middle didn’t add a lot of flavor.  Maybe the spice or orange cakes were better, but I grabbed this one first and didn’t want to be gorging on cake.

She was one short of a quorum.  Too bad.  Surely you’ve seen the reference?

Somehow I suspect my son is not really interesting in helping me with this problem.

That would be because he wasn’t bloody there.  This is one of the few things at weddings that get me emotional.  20 years is a long time, but I’m still pissed about that.

This was Brian’s way to weasle out of going onto the dance floor when the DJ asked all the couples to join in on the next song.  See what I mean about not having a partner?

This was one thing I whole-heartedly approved of.  Unfortunately, the playlist was Girls Just Wanna Have Fun for the tossing of the bouquet, followed by this for the garter toss…AND THEN he played All the Single Ladies.  Poor timing, poor timing.

I was right to be scared.  The subsequent entertainment included YMCA, the Chicken Dance, Cotton-eyed Joe, and several other songs I haven’t heard in many years outside of the children’s session at the skate rink.  At one point, the DJ specifically asked for all children to come to the floor, along with any adults who wanted to act like children.

One of my tablemates was less than enthused about this idea.

Back to fashion snarking.  Sometimes I’m old-fashioned for today, apparently.  I don’t think underwear is supposed to be showing.  Corsets worn as outerwear are an exception.

I’m so tired of that song.  It’s like the music from Frozen has been the past nine months or so.  I don’t want to hear it anymore!

And so some fun was had by all, and I kept my mouth shut (mostly).  Sadly, I have to report that even those heeled sandals were extraordinarily painful to wear after only a short time.  I don’t know how other women can stand it.