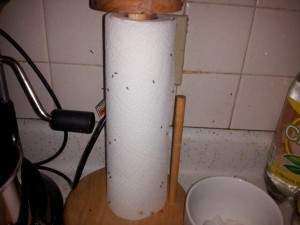 Do you see that?  Flies!  They’re everywhere! They exploded out of nowhere last week and have taken over my house.  As bad as those pictures look, there are times and places in my house where it is much, much worse.  It’s like the Amityville Horror around here.  I hate them.  I don’t know what I’ve done to deserve them.  We’re doubling-down on the cleaning and I have been searching the interwebz for possible solutions.  I wish I could just bug-bomb the house, pay somebody to set up a fumigation tent and KILL THEM ALL. 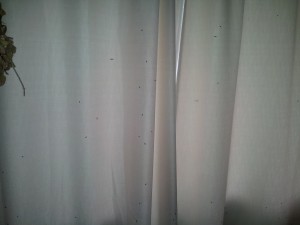 That’s not happening, though.  I could not come back into this house and live in it knowing that there had been chemicals all over every surface.  Not to mention that I know full well that whatever is producing the flies isn’t going to magically go away if I do that.  What can I do about the invasion while I wait to find the source?

There’s no shortage of suggestions online. Would you believe there is a whole slew of pages telling how to make your own flypaper?  They say you can make it much more decorative that way, as if having flowered paper is going to match your wallpaper and china worth a damn when it’s covered in flies.  No thanks, I’ll just buy some.  I’ve seen all the home-made flytrap recipes, and I tried several of them last year when this happened. (I never did really figure out what caused it last year, either. Dammit.)  The general things that I learned from last year’s trap attempts were that open traps (bowls and glasses) seemed to catch more flies than limited-access traps (bottles and inverted bottles), and things like beer and wine were a huge attractant.  Based on that, I’ve been trying to leave out bowls of various alcoholic things to catch the flies, but I’m not catching as many as last year.

Time to get scientific with this shit.  I mean, we homeschool, right?  Break out the scientific method!

Hypothesis:  You can catch more flies with honey than with vinegar.

Experiment:  Test whether flies are more attracted (and thus killed in greater numbers) to honey or vinegar.  Simple syrup will be used as a control.

I’ve set up three matching bowls, all with the same coloration.  Each bowl contains 1/2 cup attractant combined with 1/2 cup water and 1 teaspoon Dawn dish detergent.  All three bowls are placed on the same counter.

I’m going to leave this experiment to run for 24 hours and post the results tomorrow.  Next up:  Pit the winner against beer and wine!