The Michigan Renaissance Festival is open for only one Friday each year. It is School Day, an opportunity for area schools to organize field trips in the name of history. Tickets are half price for groups that purchase in bulk ahead of time, coupon books provide a little food discount, and the actors tone down the bawdiness a little to keep it more child-friendly.

For the past few years I’ve taken advantage of this to head up a Lansing Homeschoolers field trip, bringing the price within reason for our large family. The kids (and I!) look forward to this trip all year. Allowance and spending money is squirreled away, costumes are put together, and attack plans are often made to strategize all the things to do and eat.

For me, the attraction lies in people-watching, a day free from chores and school, and a rare purchase of something difficult to find elsewhere. Sometimes I eyeball the clothing shops for ideas of things I could make for myself. Otherwise, I generally drift with Jarod and Kender, mostly happy to do what they want. This year, we had A’Kos along for the ride, which put the finishing touch on my day off, as the frustrations of Kender screaming, fussing, running, etc., were virtually nonexistent.

Most of the kids run off on their own, in twos and threes. The girls had a couple of friends along, and they spent the day getting pretty and buying clothes.

Liam also had a friend along. They bought weapons, ate constantly, and delighted in sending each other and others to jail.

Kender was very good about wearing his tethering vest today, which was a huge relief since this was one of the main places I needed it. Even when I took it off so he could play on the playground, he calmly let me put it back on when it was time to move on.

The first thing I did after the playground was head to Son of Sandler for some boots. I have gotten down to having only my summer Unshoes and my super heavy snow boots as the sum total of my intact shoes. I have gotten several recommendations for Son of Sandler’s shoes and decided to make the investment in some shoes that would cover the gap. With the rave reviews and the lifetime guarantee, I hope the investment will pay off. I ended up with some ankle boots, since they were near the bottom of the

price range and had lesser soles. I wore them all day and felt very comfortable in them, so I think they will work out!

Kender laid with A’Kos while Jarod made the acquaintance of a couple of Great Pyrenees in the store. Later, a woman came in with her pet fox on a leash, something I had never seen before. A’Kos was rock solid the whole time, staying with Kender until I was ready to leave.

At lunch, A’Kos stayed with Kender and Jarod so they could sit and eat while I fetched drinks from the huge drinks line. I love how calm and sedate A’Kos is. He doesn’t budge from a down unless Kender or I run off.

After picking up some smoothies, it was time to catch a set with Tartanic.  While we waited, Jarod got into a shouting contest with the local pickle vendor over who was louder.  This caught the attention of Tartanic’s lead man Adrian, and Jarod was drafted into the band for the whole set, playing a tambourine.

Around 2:30, Kender had finally had enough, and he fell asleep while I was in the privies.  So I left him where he was sent Jarod off with a friend to finish up his activity list.  Kender was quite the spectacle.  Every passerby was cooing and adoring, and quite a few were just walking up and taking pictures, making me regret not having bought business cards for times like this.  I must say I definitely prefer being this kind of spectacle with Kender over the spectacle we presented the past few years of kicking and screaming and running off!

Kender slept for over an hour and a half, and by the time he started waking up everybody else was ready to leave.  Although I was still tired when we got home, I think that is the most relaxed and enjoyable time I have ever had at the Renaissance Festival with Jarod and Kender.  Thank you, A’Kos! 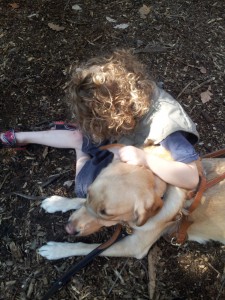