I just left everybody hanging on our road trip, didn’t I? Life gets in the way sometimes, but I will get the whole trip posted eventually.  Here’s part two:

We’ve made road trips by camping as a family before, but that was many years ago. We’ve camped more recently as a family using a popup camper, but not our own camper. This was our first long trip with A’Kos, our first trip with our new popup, and our first long vacation in many years. Essentially, it was a shakedown cruise rolled into the real thing.

Our first day was set to be 8 hours of driving: 6 to get to the nearest Chuy’s, plus a little less than 2 more to our campground. We got up early, packed as a team, and hit the road at 9:30.

This became the theme of our whole trip. We hit our first traffic jam just south of Toledo, only two hours from home. The kids enjoyed the pretty mosque we got to stare at, but it didn’t outweigh the standstill traffic.

This is an exhausting way to travel, but there is no way around it when you have a deadline.

We got to Chuy’s in time for dinner. If you are from the Austin, Texas, area, you know exactly what I’m talking about. If not, it is hard to explain, but I’ll try. Chuy’s is a TexMex restaurant founded in Austin in the early 80’s. For most of the next twenty years, there were only a handful of locations, mostly in Austin. The food is very much the epitome of TexMex, food that is near and dear to the heart of any Texan: chips and queso, margaritas, burritos, handmade tortillas, soft and fluffy sopapillas, all of it just about the best of its kind to be found anywhere. This combines with a funky, eclectic atmosphere that is pure Austin weirdness: ceilings covered in hubcaps, strange artwork and pictures of dogs on the walls, shrines to Elvis Presley, cheap 50’s-style tables and chairs.

Dinner wait lines at Chuy’s have always been over an hour at peak dinner time in Austin. When I was a kid, we would drive the 30 miles into town on Sundays after church, eat lunch at Chuy’s #2, then hit Sam’s before heading back home. It was a tradition, one that I sorely missed when I moved out of state. I have been watching as Chuy’s has expanded across the country in the past five or ten years, but the closest location to our home is still six hours away. It’s been several years since I last went to Texas and got to eat some Chuy’s. This visit was everything I’ve been waiting for.

Camping and the rest of our trip? Not so much. We rolled in both nights after dark. We forgot that you have to pull up the stove and sink in order to have power inside. We forgot to buy and bring a water hose. We forgot a can opener. We lost all of the milk we tried to bring along to spoilage. We didn’t pack quite enough bedding for everyone. We forgot measuring cups. We got caught in a hurricane-strength downpour not once but twice, rain and wind strong enough to get into our main storage bin and soak all our groceries. We spent our second night in the gnat capital of the world (no kidding, there was even a sign at the front desk talking about the gnats). We would roll out in the morning with storage bins unlatched, steps still out, children still needing bathrooms. We seemed to be sharing I-75 with the entire east coast, and we had to pass one army munitions caravan three times before we finally pulled ahead of them. Our second day of driving turned from six hours into ten.

We got there, though. I had some help from my new apprentice drivers, Brenden and Tamara. Tamara earned her rush hour creds in Atlanta, and Brenden discovered just how annoying it was to be on the receiving end of seat back kicking. We rolled in through the daily Florida afternoon showers, and were greeted in our clean condo by towel swans. 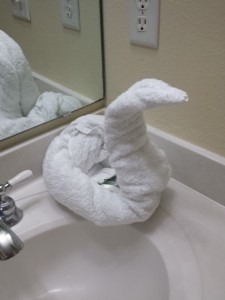 Our incentive for getting in early enough on Saturday was a visit to Disney Quest, a five-story arcade where all the games are free. This was definitely an attraction high on the must-see list for the kids, and they thoroughly enjoyed it. Kender didn’t do much, since it was overwhelmingly noisy, so he and Brian spent most of the evening hanging out with milkshakes in the food floor.  The rest of the kids had a blast, running from floor to floor.  There were bumper cars with cannons, a build-your-own roller coaster, whitewater rafting, 3-D pirate battles, and more, with tons and tons of arcade games on every floor, all coin-free.

A great week was still to come.