I went to court today.  The path there really starts with my inability to mail things, or to go into an office to take of anything, especially government things.  Back in the days before finances all went online, I probably paid more money in late fees on things than I did in interest.  I would sit down, balance the checkbook, open all the mail, write all the checks, put them all in their envelopes, even put the stamps on the envelopes…and then they would sit there for days, or even weeks, never making it to the mailbox.  I don’t know why that’s a problem for me, but I know it is, and I deal with it.  I generally don’t rely on mailing things if I can avoid it.  I pay bills online, I correspond online, I don’t send out holiday cards, etc.  As each segment of the economy has moved online, I’ve gotten better at making payments on time.

Unfortunately, this inability to get things mailed tends to extend to things like renewing the car registration, which in Michigan doesn’t even entail an inspection.  All I have to do is get it renewed before my birthday each year.  However, my birthday being right after Christmas and all, money tends to be tight, and often that renewal gets pushed right up until the deadline.  Until this year, once I got a single day past my birthday, I could no longer renew that registration online, instead having to rely on my inability to mail things.  At least twice since we moved here, that block has kept me from renewing my registration for extended periods.  This most recent time, I went an entire year with expired tags.  Unlike some libertarians, this is not actually a conscious act of activism on my part.  It’s just stupidity, although I’ll admit that once it gets to be June or July and I still haven’t gotten busted, I kinda want to see how far I can go.

I got busted last month, about a week after my birthday, my tags having expired January 7, 2013.  The cop actually ran my plates elsewhere and then followed me home, pulling in behind me to block me in the driveway and then turning his lights on.  Before those lights went on, I had no idea there was a cop on the block, and it scared the crap out of me.  He issued the ticket for the plates on the van that I was driving, warned me about the tags on the car, and left.  I proceeded to have a little meltdown, because I always end up in a near-panic state anytime I have to deal with the police.  (Always have; every ticket I’ve gotten since I was 16 has caused a meltdown, which is most of why I’m such a meticulous law-abiding driver.)  Then I went to check, and lo and behold the state had just started allowing late registrations to be paid online!  Hallelujah!  Both vehicles were registered less than 30 minutes after the ticket was issued.

As I looked over the ticket to see what I would need to do about clearing it up, I noticed something odd.  Can you spot it? 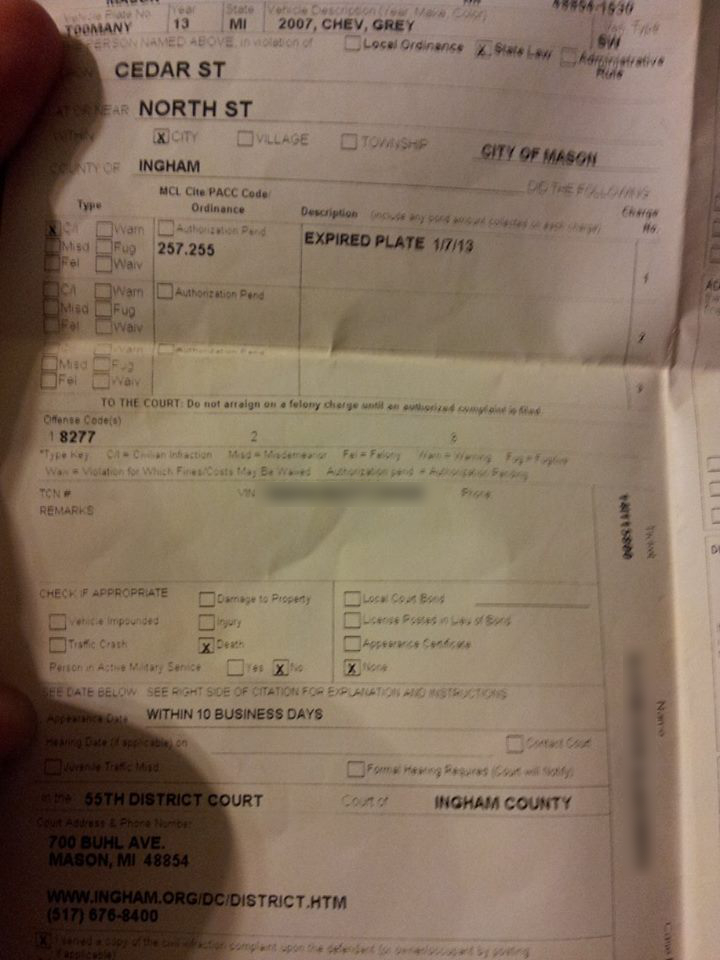 Here it is a little closer:

Death?  What is that?  Somebody died because I didn’t buy the appropriate sticker from the government and affix it to my vehicle?

Now we’re in a different ballgame.  See, I was just going to go in, show my proof of registration, and pay whatever they wanted.  That would be stressful enough.  But the Death Ticket?  That demanded that I go into court and at least show it to an official.  How could I not?  A little research showed that I could ask for an informal hearing with a magistrate and the officer involved without incurring additional court costs or fines.  More research did not turn up figures for Ingham County but did indicate that nearby jurisdictions in Michigan had a 50-70% no-show rate for the officers at hearings, which would result in a default judgement in my favor, so my odds looked pretty good.  The hearing got scheduled for today, and my brother agreed to come with me for moral support.  I fully expected to end up in the same panic-mode triggered by getting the ticket in the first place.

I was in the court building once before, but it was a good 8 or 9 years ago.  Since then, they’ve installed the now-ubiquitous TSA-style metal detector doorway and x-ray machine.  Right off the bat, they said I had to take my purse back out to the car because I had knitting needles in it.  This always brings to mind an image of a grandma stabbing some random stranger to death with her pointy sticks, yarn dangling beneath.  I refuse to consider this anything but ridiculous as long as all of these checkpoints allow you to bring in all the sharpened pencils you want, and in the absence of any verified incident of actual knitting rage.  I am tempted, the next time I go to court or anywhere else like this, to bring in a large purse containing nothing but my wallet, my phone, and a gross of extremely sharp pencils.

I got in just in time, as they were waiting for me.  They.  The officer was there, which pretty much killed any chance of the ticket just getting dismissed. (He told me later that attendance is 100% required for every hearing for Ingham County officers, so fair warning to any other libertarians or voluntaryists in the area.)  Still, once we got into the hearing room and started talking, I pointed out the Death box to the magistrate.  Neither the officer nor the magistrate realized the box was checked.  Obviously, it was a mistake, the magistrate was not interested in dismissing the ticket for that alone, and I was not interested in taking the matter to a formal hearing where that kind of technicality would matter.  What I found fascinating, though, was that neither one of them had any idea of what happened to the data in those checkboxes in their system.  They couldn’t tell me whether the Death was still in the system anywhere, whether it was used in any highway fatality statistics, whether anybody would be able to pull it up in connection with my name, nothing.  The officer did promise me that he would look into it and make sure the record was amended.

In the end, the magistrate was also not interested in reducing the fine, as they sometimes do, because it had been a full year since I paid registration fees, so he ordered me to pay the full fine.  The full fine for this infraction is apparently $115.  Since the registration on the van runs about $135, and the registration for the car runs $120, this means that I still came out ahead by over a hundred dollars.  I consider that a win.

So ends the saga of the Death Ticket.  Now I just have to deal with coming off the panic-mode adrenaline rush, which is actually physically painful these days.