For those who didn’t see this last year, Sock Madness is an annual speed knitting competition.  They’ll tell you it’s not a competition, not really, but the first person to finish wins, and I call that a speed competition, or a race.  Pattern designers, novice and seasoned, spend the preceding year(s) coming up with the craziest, most intricate sock patterns possible.  Anything goes, as long as it is knit by hand and can be worn on a human foot.  Last year alone, we had buttons, holes, swirls, intarsia, cables, and zippers, and the final round was a sock with a 5-color cast-on that took almost four hours per sock by itself.  In the past, I’ve heard tell of socks knit sideways, and I’ve seen pictures of a sock with little flags hanging off halfway up the leg.  They say the killer sock will be one with steeks, but nobody has seen it yet.

Round 1 begins the first week of March, after the February sign-ups are tallied.  Round 1 lasts two weeks.  Everybody who finishes two socks following the specified pattern within the two weeks goes onto a team to compete in the rest of the Madness.  After Round 1, knitters are split into teams of around 40 each, and for each succeeding round only the fastest knitters on each team get to move forward.  After six rounds, there is only one knitter for each team, and these knitters go head-to-head for round 7.

These year, Round 1 started last Monday.  The pattern was actually released while I was getting Kender out of the hospital from his eye exam surgery day, and I cast on my socks in the National Coney Island in Warren while we ate lunch.  With everything going on in my life, I was happy to take it easy for Round 1.  After all, if I go too fast now, I might get stuck on the Norwegians’ team with all the fast knitters, and then I’d never make it past Round 2!!  So, after about a week, I give you:  Brucie in the Snow! 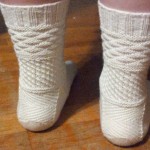 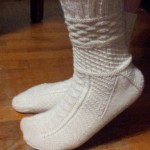 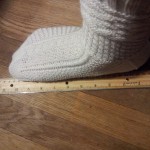 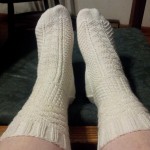 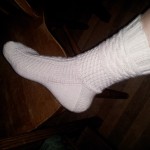 Brucie is named after Brucie the shark, who lives in a pool next to the treehouse cabana where all the Sock Madness spectators hang out, sipping margaritas, sending cute gogets to fetch things, and being waited on by beautiful cabana boys in kilts.  I didn’t make this up; you can read all about it on the Ravelry forum.