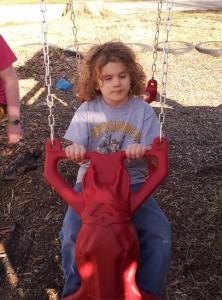 Kender got a new swing today.  If I had been doing HabitRPG last year, today I would have accomplished the reddest of my red reddy red to-do tasks.  That rider has been sitting in our shed since we put this playset up…was it 7 years ago? 8?  There’s been a baby swing in that spot for most of that time.  By the time Jarod really outgrew it, Kender was ready for it.  For the last two years I’ve been saying I was going to take down the baby swing and put up the rider.  It took the family across the street asking if they could have our baby swing to get me to do it.

And now I know why I was putting it off.  I am going to be so sore tomorrow, I’ll be lucky if I can manage to salute the elements, nevermind actually carrying things up to the room.

I didn’t expect it to be such a big deal.  I thought, well, there’s been a swing there all along, with the swing hooks already installed.  Take down the baby swing, hook the new swing on the same hooks.  Done!

When I got the box out, the swing itself was in pieces, so I went back inside and down to the basement to dig up the 9/16″ wrenches.  I took those out to the playset, hauled the contents of the box over, then looked again at the instructions.

It needs its own brackets installed, four of them.

Have you ever tried to drill a 3/8″ hole in a doubled piece of wood that’s been weathering outside for 8 years?  When said piece of wood is over your head with the tallest ladder you have available? I tried, really hard.

Back into the basement to dig the corded drill out from underneath all the other power tools on the workbench.  Then dig through every coffee can and finally completely unload the bottom shelf with all the bladed power tools to find the @#$@#$%#%^ bit key.  Take that out to the playset.  Go back to the living room, get the one-and-only ginormous extension cord, wade through the black raspberry patch to plug it in.

Have you ever tried to drill a straight hole through double-thick, aged wood over your head so that it lines up with metal brackets on both sides?  All I can say is that I spent more time drilling those holes, multiple times from both sides, than on anything else.  Arms holding a drill over my head the whole time.

With that, and with the holes in the swing itself not being quite big enough to get the bolt through, instead of a quick swing swap I spent about two hours pushing and pulling and lifting and hammering and swearing. Lots of swearing.  And all this was after my bike ride and bodyweight workout for the day.  So yeah, I’m hurting, especially above the waist.

But Kender has a new swing!