Round 3 was pretty interesting this year.  First off, there were the specs, which had everybody talking way back in February before we even knew in which round they were going to be used.

Eight colors for one sock?  And what on earth are those matches for???

Well, the colors turned out to be for things like this: 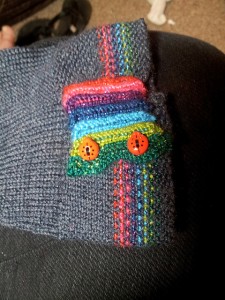 And this (see how the colors make little dots on the heel?): 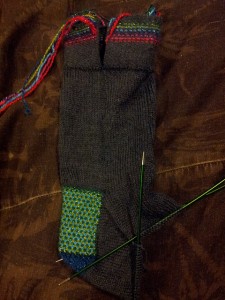 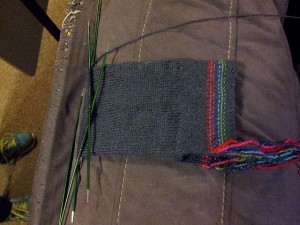 As for the matches, they weren’t actually part of the socks. They were just placeholders used to keep the buttons from getting sewn on too tight:

After watching 3 episodes of Vikings, 18 episodes of classic Doctor Who, 7 of episodes Game of Thrones, 3 episodes of True Blood, the Thomas Crown Affair, A Knight’s Tale, and Pacific Rim; and knitting during one doctor’s appointment, a day at our Foster homeschool co-op, waiting at cheer practice and a therapy appointment, a little hanging out with friends, and a lot of listening to Kender screaming, about 29.5 hours of active knitting overall, I give you the completed Round 3 socks, Rainbow Pipes with Linen Stitch: 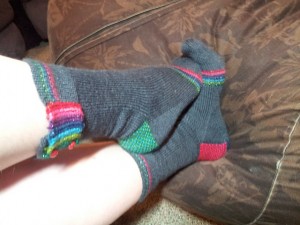 As of today, we are nearly two weeks out from the pattern release, and we are still waiting for 69 out of 286 knitters to finish this round.  Brian is teasing me that we’ll be doing Round 8 in August, and I’m starting to wonder if he might be right!  I just hope there isn’t any active knitting for me while we’re away next month getting Kender’s dog.