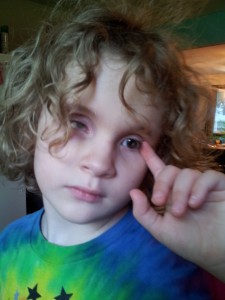 Today is Kender’s sixth birthday.  I don’t think he understands what that means.  He screams no, covers his ears, and walks away if we say, “Happy Birthday!” or try to sing.  He’s never been able to say, “I’m (xx) years old.”  He doesn’t talk about his birthday, he doesn’t ask for a party, he doesn’t spend the whole year planning his party and begging for presents, like all my other kids do.

I thought about having a party this year anyway, but I never planned anything.  Instead, I went by the store today and picked up all his favorite things for dinner, a strange Kender-only mishmash of junk food like macaroni and cheese and chicken nuggets combined with blueberries, salad, celery and cucumbers.  I got some cupcakes, too, telling myself that it was not cheating, he doesn’t care, even the other kids don’t care, they just want cupcakes and don’t care what kind or who made them.  We’ll all have dinner together, and then we’ll sing Happy Birthday to Kender and eat cupcakes.  I’ll dig up at at least one candle to light, but we have to be careful.  He’ll lean in too close and risk setting his hair on fire, and he doesn’t fully understand blowing out the flame yet.

I haven’t gotten him any presents yet.  Neither has anybody else (aside from a savings bond, something he can’t see, touch, or understand), not even the grandmothers.  My present to him this year is clearing and organizing his room, though he may or may not realize it.  I wanted to get him a light table, too, but haven’t managed it yet.  He’s already been exploring the toys I left in his room more, pulling out some special books and playing with the blocks.  He dumps things, too, and we rush in to pick them up.  I’ve gotten him to help with picking up once or twice.

It’s hard not to compare him to other kids.  Six-year-olds are heading off to kindergarten or maybe even first grade.  They know how to read and are working on writing.  They can do basic math.  They can tell you their name and address and phone number and show you the way to their house.  They play games like tag and softball, they ride bikes and scooters, they have favorite movies and books.  Not Kender.

For Kender, we celebrate how much he is talking, how he will frequently answer questions like “What is that?” or “What are you doing?”  We’re happy on days when he doesn’t scream and throw furniture or bang new holes in the wall.  We ask for a kiss or a hug and hope for an outstretched cheek instead of a scream.  We comb his hair and scrub his body, brush his teeth and fasten his shoes.

This year, I hope he will eventually be able to sit with me and listen to a story, show some interest in the words on the page or some indication that he is comprehending what he hears.  I hope we can start talking about shapes and textures, maybe even colors and numbers.  Goals and expectations were always my least-favorite part of the dreading IEP process when we were still getting services from the schools.  I don’t expect him to be reading and writing and playing cooperative games by the end of the year, but I don’t have anything concrete in between that I expect him to do.

I’ll just keep on doing what I’ve been doing for six years: keeping Kender safe, giving him love, and doing my best to create an environment that he can learn and explore in…and hoping someday to get the keys to unlock the little boy inside that I’ve never really been able to talk with.