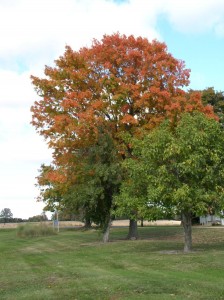 Today is Mabon, the celebration of the fall equinox in the Northern Hemisphere.  The world sits at the balance between the summer half of the year and the winter.  Now the days begin to grow shorter, the nights longer.  Now we reap the fruits of the harvest, the corn and the wheat, the apples and the pumpkins, all the things that have grown through the summer.  Now we stock up, canning and preserving, preparing for the long, cold winter ahead.

In Wicca, now is the time to take stock of our year.  It is time to look at what our plans for the year were and how they went.  It is time to prepare for a period of rest and rebirth as we head into the death of Samhain and the birth of Yule.  It is a time to look at things in our lives that can be sacrificed, spiritual fetters and garbage that are holding us back from growth and progress.

This year, I had a few goals.  I wanted to do more things with the kids, more of the things they want to do instead of only focusing on the things I think they need to do.  I wanted to work on connecting with and building the Wiccan community in Lansing, building up the numbers that would be attending rituals here.  I was also given a heads-up this year that I should expect a period resembling initiation (or possibly hazing!) in my priesthood and in my relationship with Loki.

This spring, I had the kids draw up “bucket lists” for the year.  I told them to put anything and everything on them, no matter how silly.  I wanted to have things to aim for with them, a direction to follow.  I do not feel that I made as much progress down this goal as I had hoped, but we did a few things.  We took a hike down the old brick factory trail.  I will have at least one and possibly two microscopes by the end of the month.  The girls are taking a thrown pottery class.  We went to Pagan Fest.  I spent a day with the younger three visiting seven playgrounds in a single afternoon (the goal was 10, but they got worn out).  Now that I see that list, I guess the idea worked better than I expected!  We’ll continue working on those lists, and next spring we’ll make new ones and work on those.

I’ve been convinced for years that there were more pagans and witches in Mason and the greater Lansing area than I already knew.  This year, it seemed like every ritual and event brought me into contact with at least one.  I led two rituals in the Lansing area, and participated in a couple more.  I went to Pagan Pride Day, got in touch with a local chat night for a while, and got the word out about Crossroads.  I think the progress on building community was perfectly acceptable given the limitations I work in (namely, very little extra free time to network!).  This goal is now going to be tabled until I get further directions from my high priests, I think.

This year, I was raised to Second Degree Priestess with Crossroads.  I was encouraged to take a more active role in leading the church, both in rituals and elsewhere.  I explored some possibilities for clerical work outside actual rituals, things that might lead me to or become the Great Work I will need for Third Degree.  And then I jumped head-first into seminary training with the goal of finally getting a degree, hoping that having that degree be in something I had already spent most of my life studying would make it easier for me to finish.  This was entirely an impulse decision.  I can’t recall even a few minutes of thinking before taking the plunge.  I say a prompting made me do it, because really, what could be crazier?  Signing up for seminary when the year is half done (assignments must be completed by Yule to move ahead, and I haven’t gotten any passes for being second degree in an ATC church), with everything else I have on my plate?  Crazy or not, I have been enjoying my time there so far, and I hope that continues.  Maybe this is the “initiation” period I was warned of back in February.

Not that the year has been lacking in hazing-type events.  After (let’s be honest) living on credit cards since Kender was born, that well finally dried up this year and we’ve been forced to live within a budget tighter than any I can ever remember.  It feels tighter to me than previous low-money periods partly because of how many of us there are now, making every little expense magnify by a factor of 8 (or more, sometimes).  It doesn’t help that it seems like everything in our house is breaking at once.  All the appliances, our cars, the computers, the furniture, even parts of the house itself, everything is broken, worn out, falling apart, molding, losing its stuffing, leaking, in one case catching on fire (!!).  So at the same time that we have no extra money, we need a ton of it to keep functioning.  Yes, I know where (or who!) this lesson is coming from, but I don’t have to like it.

Every year at this time I am asked to make a sacrifice.  A few years ago, I consciously let go of my breeding status, placed within a corn dolly holding a baby that I burned in a fire.  Another year, I offered up my roots, thinking that if I distanced myself from my Texas family, friends, and background it would help ease my longing to leave this place.

This year, I am letting go of my expectations.  I want to formally release the idea of what my life should look like, all of the “supposed to” and “have to” and “everybody else” that puts boundaries and strictures on my life.  I want to release the idea that I have to know every detail of the path I am about to take before I ever step foot on it.  I don’t mean that I will have no goals, but I do mean that I want to have fewer preconceptions about what achieving those goals will look like along the way.  I want to focus on my destination, and I want to focus on what I see along the way and enjoying the journey.  I don’t want to walk my path worrying about whether the right trees and flowers are growing there.

I’ve spent a lot of time recently feeling like a rat in a cage, scurrying back and forth, back and forth, screaming and seething with rage and tears inside (yes, even when you saw me laughing) because I want to find a way out but I am trapped.  I believe this is my door, to simply have the confidence to walk forward, not just to keep swimming in place but to move forward, regardless of whether I think it will work, regardless of whether I am confident that it is the best path.  I’m tired of standing still, tired of feeling trapped.  Maybe I’ll end up someplace unexpected.  At the very least, I won’t still be where I am now.

Hopefully it won’t mean I’ll end up running off a cliff.

Have a happy fall and harvest and all that goes with it.  Happy apple picking, happy hayrides and corn mazes, happy cider and mead and festivals.  We had our ritual this past Saturday; next weekend we’ll be off to the apple orchard.