There is little more frustrating in life than to be given advice that has already been tried, maybe even failed.  It happens all the time.  New mothers get it in truckloads, advice for breastfeeding, sleeping, feeding, comforting, walking, toys, that advice never ends.

Or what happened last week.

Those giving the advice mean well, I know.  You can’t really get upset at them for trying, because all they want to do is help.  They’re thinking that maybe they’ve got the one little piece that you just haven’t heard yet, that maybe they’ve got something that can finally help.  I know.  I’ve been on the giving end of this exchange many times, and it’s always because I just want to help, and sometimes I do know things others haven’t learned yet. 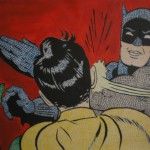 To be on the receiving end of this exchange, though, is to feel like screaming and throwing things in frustration.  Sometimes hearing that well-meaning advice feels like a knife wound, because you’ve done that, you tried that, and then the feeling comes that maybe you didn’t try hard enough, maybe you didn’t do it right, so it really is your fault anyway.  Sometimes you want to yell at the person in question, give them that Batman-Robin smack and say, “But I DID that already! It doesn’t work! Don’t you listen?!”

Those of us in chronic pain have generally tried absolutely everything we can get our hands on legally (and maybe illegally, too).  We’ll chase down the craziest rumors in the hopes of finding that one magic trick.  And yet we still have to listen to the litany of the same recommendations every time somebody new finds out about our pain, from Advil to stress management to “get more sleep.”  We hear it over and over until sometimes we’re afraid to tell anybody about our pain, we stop getting any help at all because we’re so frustrated at getting what seems to us like the same useless help all the time.

I have a five-year-old son who has never pooped in the potty.  Believe me when I say I have tried everything I can dig up or think of.  He’s blind and autistic, he just hasn’t made the connection, and I can’t figure out how to make the connection for him.  It’s the same as with pee, and with that what I had to do finally was force the issue and reward him for being on the potty, and he got it.  It’s not control, it’s not power, it’s not a game or a joke.  We’ve done the dolls, we’ve tried books and movies and tablet apps, none of which he interacts with.  We’ve talked, we’ve demonstrated, we’ve tried all of that.  More than anything, I would love to find that one person who has the magic secret that will fix this, but every time I reach out about it, I get the same advice.  So I don’t talk about it much.

Then there’s Chris.  The level of frustration here is overwhelming, because it’s not just pain, it’s not just cleaning excrement off the carpets or making baby food.  People frakking DIED, and those of us left behind feel like we failed somewhere.  Again, we get all kinds of advice, not for Chris obviously but to try out next time we find ourselves supporting someone like her (which I hope I never have to do again, but I will if I see it, I will).  The same frustration goes through my mind when I hear the things that we did recommended to us as something that might have stopped her death.  Did we not do it right?  What gaping hole did we leave in the shield wall we tried to build for her?  And if it wasn’t good enough for Chris, maybe it won’t be good enough next time, and I’ll have to watch it happen all over again because I didn’t do it right.

To those on the receiving end of this kind of advice, know that you are not alone, you are not the only one fighting this frustration.  You are under no obligation to those who give you advice, not in whether you take it or how you take it, but just remember that most people give advice out of a genuine desire to help.

To those giving this kind of advice:  Try to understand when we lash out in frustration, and know that it is not really you, we don’t want to push you away, we’re just expressing the turmoil we feel in not being able to find a solution of our own.  Give us a little space, and then please…come back and try again (maybe without more advice, though).  Be there for us.  We need your support even when we can’t use your advice, even when we go turtle and hunker down and try not to bother anybody with our pain.