Today was amazing and exhausting all in one. I spent half the morning fighting back tears and half the afternoon fighting off Kender.  I have more pictures, but because I am posting from my tablet most of them will have to wait until I can get to a real computer that isn’t painfully slow at inserting pictures!

We got up early and had breakfast in the hotel lobby, where we met some of the other families in our class for the first time.  Something about seeing the other families with their children so much like Kender makes me feel a little less alone in the world. We really haven’t spent a lot of time around other autistic kids, and I didn’t realize how much I needed to see that.  I wonder if the other parents felt the same way. There are 18 families in our class, I think, and all of the kids have at least some level of spectrum issues.  At breakfast we met a bouncy little girl who was too grumpy to sit and eat breakfast…just like Kender.

The hotel provides a fabulous spread.  Getting all our breakfasts and more than half of our dinners cooked for free makes all of this so much easier, and the hotel does a lot of work with 4 Paws families so they are accustomed to our special kids in their dining area.  In fact, everything about this hotel is wonderful…except the in-room coffee.  The lobby has coffee all day long, it’s a quick walk across the courtyard, and it’s delicious coffee.  The coffeepot in the room is only a 4-cup pot, though, and they only give you a single pod for it.  That’s fine, we’ll have an eye-opener and then go fetch, but I want to share because if I had known ahead of time, I would have brought our Keurig, or even a French press or a moka pot.

Every time I stopped to think about what we were doing and where we were going, I started to choke up.  Kender showed some of that secret understanding he has, where he shows how much more he knows and understands than he is telling.  When we finally had teeth brushed, shoes on, canes ready, balls and treat pouches in the bag, he was up and out the door and into the car like he knew exactly what was going on even though he’s never really shown any enthusiasm about A’Kos.

We got to 4 Paws a little after 9:30, and I choked up again pulling into the driveway. And meeting Kelly, who worked with us on our fundraising efforts. And signing in and putting Kender’s name down on the sheet as “companion.” And seeing all the kennels lined up for us. And finding A’Kos’ kennel. And putting my fingers up to the door and saying Hello for the first time. 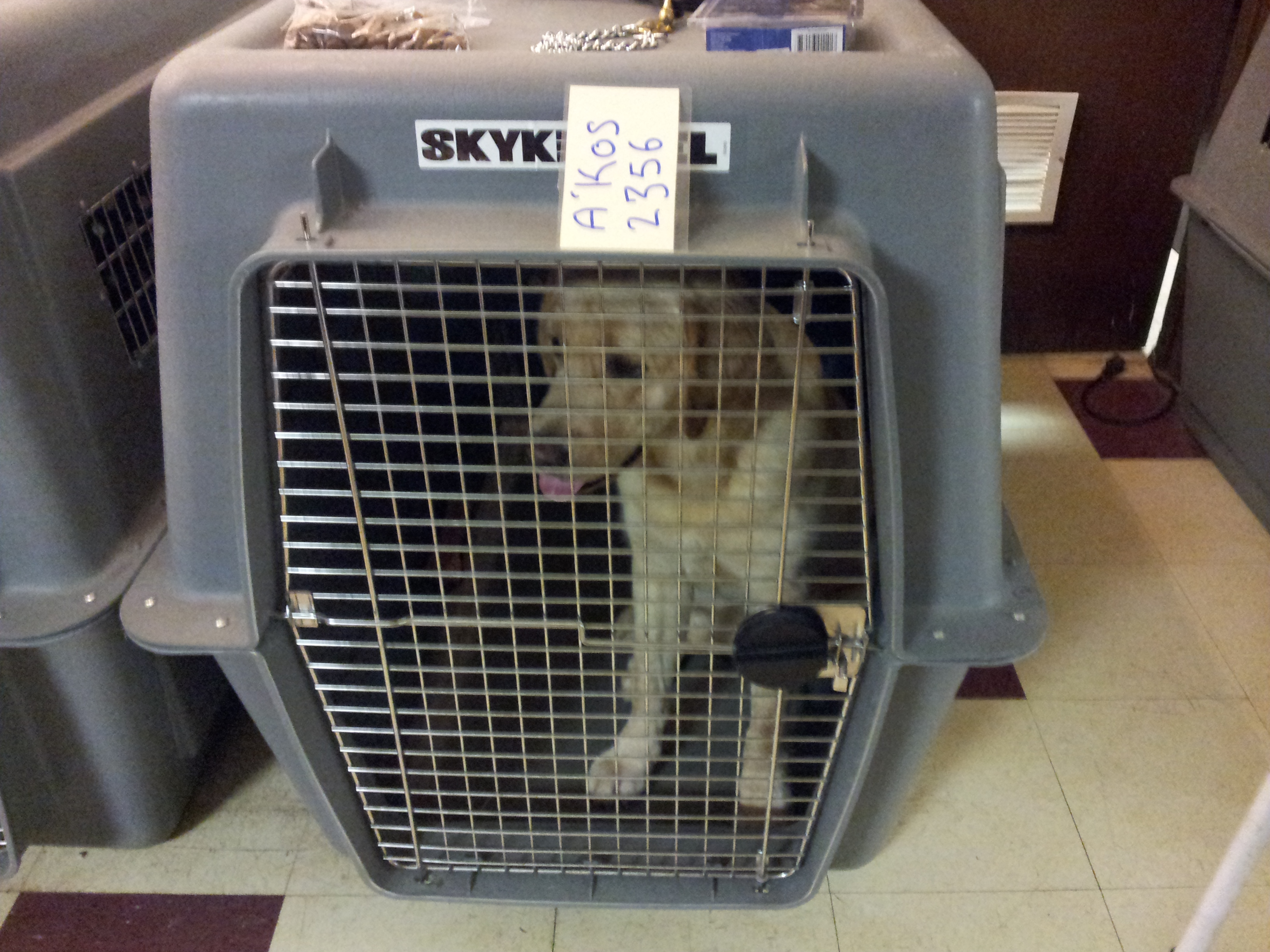 Kender wasn’t really interested, although we tried to get him to come over and say hello.  Meanwhile the little girl we’d met at breakfast was running up to her dog’s kennel, saying his name and asking when he could come out. That was hard.

We met families from South Dakota and Chicago and even Ft. Worth. We worried about the family from the west coast who had missed their flight and were still stuck on the highway hours away as class was starting.  There were coffee and bagels waiting for us, and Kender found a nice circuit he could walk around the training area and the bagels and the kennels, the crowds parting before the mobility cane like they always do.

Jeremy, the head trainer, introduced himself and some of the staff, including Shelby, who seems to have done the most work with our dogs. He passed the mic around the room so each family could introduce themselves a bit. The kids were wandering around a bit, especially Kender and his new “friend” who seems so much like him.  Finally, the moment we were all waiting for came.  Time for the dogs to come out!  They got Breakfast Girl’s dog first, and from the layout of the kennels we thought A’Kos would be near to the end. No matter; I choked up again watching that bouncy girl get to hug and pet her dog.

And then they called for A’Kos to come out! The second dog!  I wasn’t ready!  Kender was still wandering over by the other side of the room! Shelby brought us one of the two bags of dog food that were on his kennel, labeled with his name. 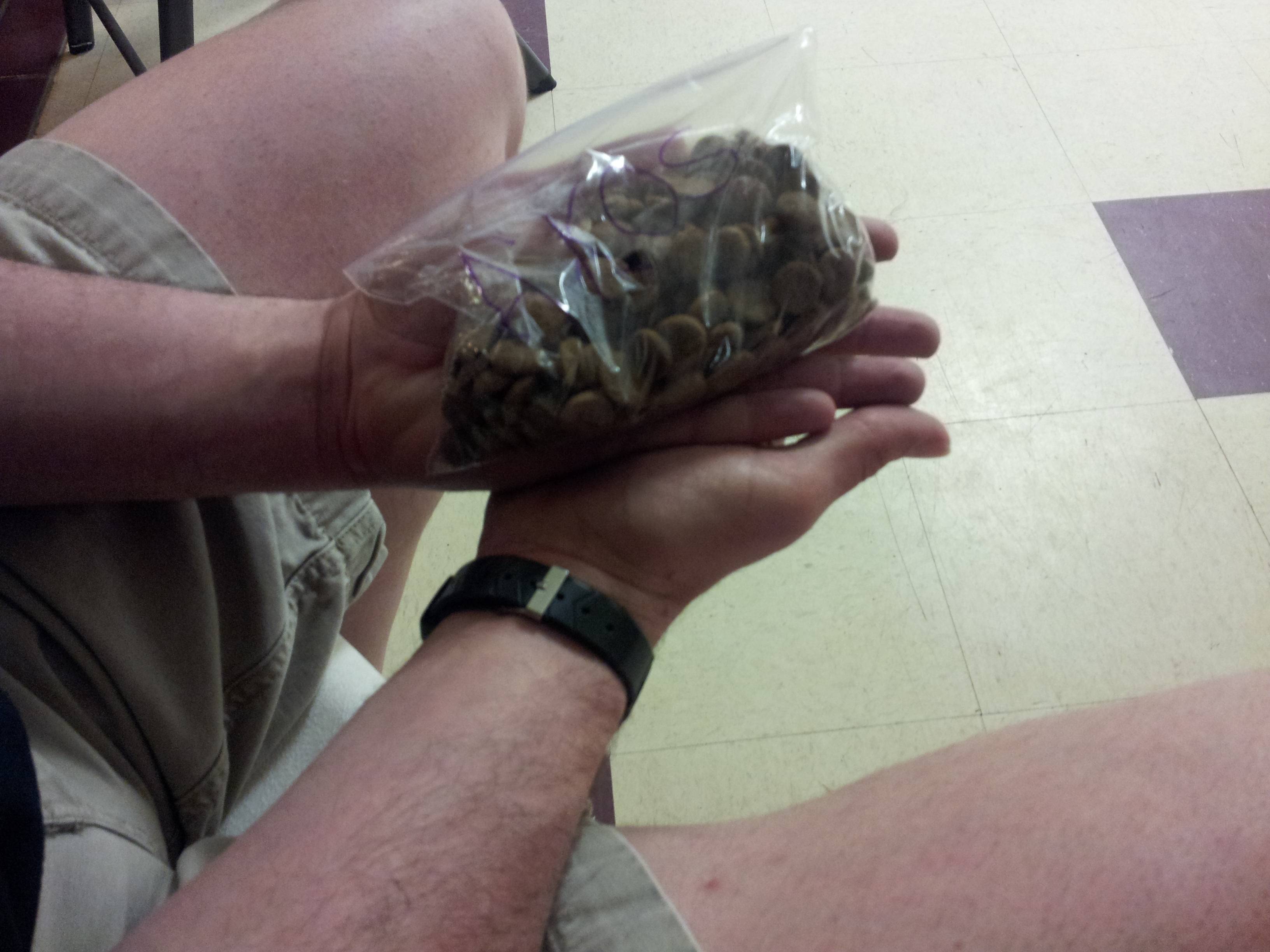 And there he was, so hungry and ready for his food!  I tried to dole it out a little at a time, to make it last, but then I discovered…

Oh. My. Gods. I never considered this, never ever ever. I never had a big dog before. I grew up around dachshunds. Every piece of food I gave A’Kos got licked out of my hand, snuffled, garbled, SLOBBERED! And the more he ate, the worse it got! Slimy, slimy, slimy!

Yes, I have some sensory issues.

There’s the Fair Warning to you. Big dogs come with slobber and slime.  It got better as the day went on, and I was only giving him one piece every so often instead of a whole meal by hand. Still… Dog Slobber. *sigh*

About halfway through the bag, she asked if she could hand us his leash, and there we were, just us and A’Kos.

Brian went to get Kender, and we coaxed Kender into letting A’Kos take a couple pieces of food out of his hand, but it didn’t last long before Kender was headed back toward his new favorite riding toy. We brought A’Kos over to Kender then to say hello, but Kender still was not impressed. So Brian took A’Kos back over to our chairs to play a bit while I watched Kender.  Kender kept asking to go outside, so I finally asked somebody to show us where the playground was. We were the first to escape.

The playground area was really nice.  There is a big paved area with a basketball hoop and a ton of trikes and power wheels and things, two playsets with slides and climbing, a swingset with wonderful plank swings, a roofed area with picnic tables and chairs, and even a trampoline.  After planking a bit in the grass and enjoying the quiet, Kender spent the rest of the morning swinging and pushing a power wheels toy around. Brian brought A’Kos out to say hello again, and then it was time for lunch.

There is no shortage of anything around here.  Restaurants of every kind everywhere, all the grocery and convenience stores, malls, everything.  There is a Starbucks near our hotel and a Tim Hortons near the training facility. For lunch today, we chose Subway, and with breakfast and dinner covered by the hotel we might just be lazy and eat lunch at Subway every day…especially since they were nice enough to give Kender an extra bag of cucumbers and peppers!

The afternoon session was the real beginning of the training program.  Training us, the parents, that is. The dogs are already excellently trained.  It’s the parents who have to figure out how to handle the dogs.  Afternoon session was 3 hours, and all we worked on were “sit”, “free”, and “down”.  We have to practice doing all the commands and give a food treat with every command so that A’Kos will bond with us instead of Shelby and Jeremy.  He is such a good dog. I can get him to sit and down so easily. The problem I had was getting him to stay in down.  The little stinker would roll over to get to a neighboring dog to play with, or he would get up and lie back down in the walkway.  Jeremy said the walkway was the problem.  We happened to pick seats right next to the kennels, so every dog coming out to their family walked past us.  All those dogs are A’Kos’ friends, more so than we are right now, so of course he wanted to play.  I did a lot of practicing “sit” and “down” just getting him back into place and out of the walkway today.  Tomorrow, I will pick a different seat.

Kender was very upset and tired all afternoon.  Brian took him out to the playground for most of it, but kept bringing him in because it was hot and sunny and he was turning a bit pink. Every time Kender came inside, he starting screaming to go back outside, and he threw the most awful fits I’ve ever seen from him, kicking and screaming so hard he was hurting me and scaring A’Kos.  I think being out of his familiar environments is taking a toll on him.  Hopefully that will get better after a few days here.

At the end of the day, we left A’Kos at 4 Paws (Kender wouldn’t even say goodbye) and headed back to the hotel.  We had spaghetti and meatballs for dinner, with complimentary wine and beer (well, Coors Light; can’t have everything). The manager on duty came by and asked about our stay, why were we there, etc., and came by repeatedly to refill our glasses.  Kender ate a ton of breadsticks, which will surprise nobody who goes to Foster with us.  Later we went to Meijer  to pick up a few things, and Kender took several walks around the grounds with Brian.  He’s passed out, now, getting more sleep tonight than he did last night!

After today, I feel a little less sure about bringing A’Kos home. Even though I think I did well with him today, I worry about how I will do with him full time. We’ve known at least one service dog who essentially got untrained by his owner, and I don’t want that to happen with A’Kos.  I worry about my past failures with dogs.  Brian seems even more confident.  He trusts that A’Kos is a good dog and follows commands so well even on our first day with him.

We brought the dog bed we bought for A’Kos down here with us. It is sitting on the floor next to where Kender is sleeping, waiting for him.