My Aunt Anne might be coming to visit me this month.  Just the thought of her visit is driving me nuts.

I have idolized my aunt since I was a little girl.  Unlike my mother’s family, I never saw my dad’s family very often, so every time I got to see any of them it was something super special.  When I was really small, I loved her long, long hair and the way she could tuck it all up with a couple of big pins or barrettes.  I got to visit her home once before she hit the road, and I loved how she had so many cats and such cool decorations.  I loved the way she wore gypsy skirts and big, dangly earrings.

When she got divorced and hit the road, she’d come to visit in her van, sometimes with one of her tall, tall sons.  She lived out of that van, camping out, riding her bike all over the world.  When she came to visit us, she’d cook for us, cooking amazing gourmet vegetarian meals that I was totally in awe of (even if I didn’t always want to eat them, sad little carnivore that I am).  I loved her red hair and splotchy freckles, the way she looked like she lived in the sun and had been kissed and loved by it.

When I was probably around 13 or 14, she and her son Brenton came to visit us in Georgetown, and they let me head out on a bike ride with them.  I have never, ever forgotten how fast they left me behind.  I didn’t even make it all the way across the dam before they pulled ahead of me, and they left me in the dust as we headed up the hill on the other side.  I turned around and headed home, feeling sad and tired and nerdy fat girl, and they showed up hours later having ridden for miles and miles around the Hill Country.  I was a bicycle kid, riding my bike all over my side of Georgetown, but I found out that summer day just how wimpy a cyclist I was.

When I was in college and getting married, Aunt Anne was riding her bicycle through Europe and Africa, where the locals in Kenya called her “Bicycle Lady” while she lived with Aunt Kay in Thika.  When I was busy taking care of three babies at once, Aunt Anne and her friend rode their bicycles from Portland, Oregon, to Portland, Maine, and I followed their trip from my computer at home with spinning wheels in my mind.  I’ve seen her maybe once a decade, exchanged emails maybe once or twice a year.  As my grandmother (who was about the same age as Aunt Anne) grew sicker and eventually died, I marveled at the difference between these two relatives, both the same age and yet both so different.  I was determined that I wanted to grow old like Anne, not like my grandmother, as much as I loved her.

Every once in a while, another story would come through the family grapevine: how Aunt Anne was riding down the street one day and didn’t watch where she was going and ended up plowing into some kind of truck, breaking both arms.  She was back on her bike as fast as she could get the casts off.  How Aunt Anne got diagnosed with an autoimmune disorder, and her doctor limited her to only twenty or thirty miles a day.  How Aunt Anne had to have bypass surgery, and she left the hospital AMA after only a couple of days, unable to stand being so still for so long. Damn, my Aunt Anne is starting to sound like Chuck Norris!!

I’ve always wanted to grow up to be like my Aunt Anne, cool and natural and strong and knowledgeable, confident in herself, independent and self-sufficient.  I’ve tried a few times to get my cycling abilities up, but life always gets in the way.  I just hold on to the thought that Anne didn’t hit the road until after both her sons were moved out, so I’ve still got plenty of time to crank up my awesome just like she did.

Every chance I get to see her could be my last.  Aunt Anne is 82 years old this year.  When she told me she expected to be coming through Michigan with (new) Uncle Ken this summer, bikes and all, I got super excited.  Now I’m hitting the roads again, trying to crank up the miles and the pace, just hoping like hell that this time, this super woman more than twice my age won’t completely abandon me in the dust again.  I wonder if she’ll even want to ride with me.  I ride bicycles like my Uncle Don rides motorcycles, helmet-free, only the minimum of dark, utilitarian clothing and equipment.  I look at pictures of Aunt Anne and Uncle Ken in their colorful helmets and riding jerseys, and remember her clipless pedals, and I wonder what they’ll think of this black sheep riding anywhere near them.

I just hope I get the chance, and a chance to have some conversation over wonderful food after, one more chance to talk with and learn from one of my most amazing relatives.

Update on Death of Flies: The fly bait experiment continues.  The first round was aborted after only six hours, when it became more than obvious that honey was going to win and we wanted some counter space back. 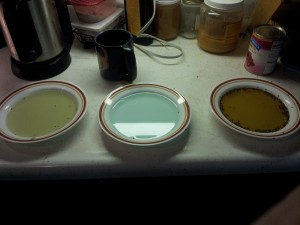 I left that one up for about 48 hours and discovered that it wasn’t really effective beyond 24.  Today, I set up Round 2 of the Great Fly Bait Experiment:  honey vs. beer.  Don’t worry, dear; I used 3-year-old beer already declared skunked for this round, not the good stuff. 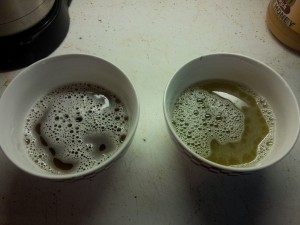 The beer is on the left, and the honey is on the right.  They are mixed the same as before, 1/2 cup of bait mixed with 1/2 of water and about 1 teaspoon of dish soap.  And now…we wait. Again.  Time for a bike ride or something.